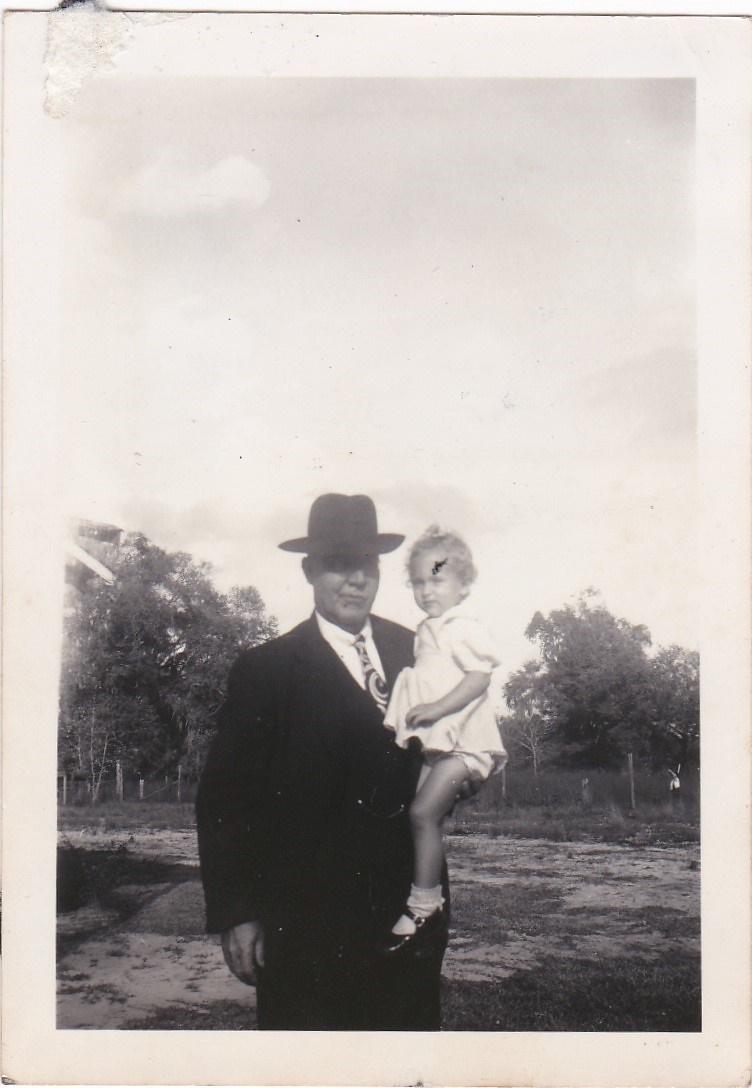 Papa was a big man in stature and in voice.  His voice could carry the length of a river as he vociferously directed his grandsons to paddle while he fished, and no one could miss his reaction when an errant snake surprised him on a low-hanging bush.

Papa was a hard man who labored through the Great Depression to provide for his wife and family of five girls and one boy.  My mama was his middle daughter. He lived in two centuries, experiencing the aftermath of the Civil War in the South and the impact of World War I and the Roaring Twenties.  He saw the debut of the automobile, though he spent much of his life traveling in a wagon pulled by a mule, and he watched the urbanization of the fields of his youth as pavement replaced soil and buildings sprouted in the place of trees.

His family toiled together in the fields, and he worked carpenter jobs as well.   They were itinerant, moving where the work was, making their home in rented houses that they scrubbed down to make livable.  The girls could cook a full meal on a woodstove by the time they were teenagers, and they all knew the back-breaking labor of farm life and field work.

Papa never owned a television, and he never seemed especially interested in watching one.  In later years, he could be found sitting in the shade during the heat of the day or in his trailer during the twilight that signaled his bedtime.

He did watch as Neil Armstrong walked on the moon, but he wasn’t sure he believed it was true.  He was called Oscar, and I heard him talking with a friend on this momentous occasion.

“Oscar, do you really believe they are on the moon.”

“Nah.  They probably just set up somewhere in a desert to film that.”

Before coming to Christ, Papa experienced the corruption of alcohol addiction, but salvation transformed him into a fisher of men.  With a third-grade education he learned to read the Bible, and he spent many years traveling across north Florida and southern Alabama ministering in churches.  The voice that threatened the peace on a river boomed from the pulpit.  He planted at least one church, he planned revivals, and helped lead associations.  God stretched Papa’s third-grade education like He multiplied the five loaves and two fishes.  I only remember hearing him preach one time, and the text was “Why call ye Me Lord, Lord, and do not the things which I say?”.

When he no longer pastored churches, he would walk to a little church close to where we lived.  Sometimes the pastor there would ask him to preach, and he would.  When he died, he left a small leather pouch of sermon outlines, painstakingly typed on an old manual typewriter, a legacy of his faith.

Papa was a constant in my childhood.  He was always there.  When we went fishing or when we were eating watermelon, he was with us.  He came to the table when mama fried fish and when she cooked for Thanksgiving and Christmas, and we carried his meals to him in his trailer at other times.  If we were yelling in the yard at twilight, his bedtime, we would see his head come out of his trailer as he told us to be quiet.  He put on his union suit at the beginning of the winter, and he didn’t take it off until spring, so we associated an unwashed smell with him at times, but that was how life was in his youth.  He saw no reason to change.  When he dressed for church his short-sleeved dress shirt revealed snowy white arms down to his wrists, contrasting with the deep brown of his hands and face.  Any other time you saw him, he was dressed in a pair of overalls with a long-sleeved khaki shirt, a floppy brimmed hat on his head.  He bore the tan lines of a hard-working man.

Papa was in his seventies when I was born, and I don’t remember him smiling much.  To me, he appeared stern, but his love broke through in little things.  He lived in a trailer in our yard, and he would bring me Brach candy stars when he would walk to the store.  He spent an entire morning helping my mama build a snowman during the one north Florida snowstorm of my childhood.  He called me “Tee-wee”, and he had nicknames for my brothers and sisters as well.  I remember when I accepted Christ, and he told me “That’s good.  That’s good.”

Drama was part of life with Papa.  He could pout with the best of them when things did not go as he thought they should.  We still refer to a jutted-out lip as a “Brumby lip” in his honor.  There was always something stirring between the brother and sisters and Papa, but I was young enough that I only learned of the drama second hand.

I know from the pictures of his youth that he had a megawatt smile.  Occasionally, he would get tickled about something, releasing a laugh was as big as he was.  Life had been hard, though.  His wife died in her fifties after a long bout with cancer, leaving him with two teenage girls still at home.  World War II came along and drained even more life as he watched family members go to fight.  All in all, he was living in a world that he no longer recognized, and I am not sure he ever reconciled to that.

Papa lived to be eighty-five years old.  In the last months of his life, mama and daddy moved him into our house so mama could care for him.  At night, he would tell mama to sing, and his big voice would lead out with ‘On Jordan’s Stormy Banks” or some other hymn.  Even though he was feeble, his voice remained strong.

Papa wasn’t an easy man, but he was a man.  His life of work instilled a work ethic that was evidenced in his children.  He was a force to be reckoned with when angry, and yet he submitted himself to the love of Christ.  In him, I saw an example of the contradiction of love and struggle and sorrow and joy we experience as we try to survive in the difficulties of this life.  Sort of like those unexpected snakes on the river, the trials surprise us and threaten to destroy.  It is up to us to choose whether to flail while yelling in fright or sing.

Psalm 103:17 – But the mercy of the Lord is from everlasting to everlasting upon them that fear him, and his righteousness unto children’s children;